The influence of lubrication on the wear items of industrial machinery 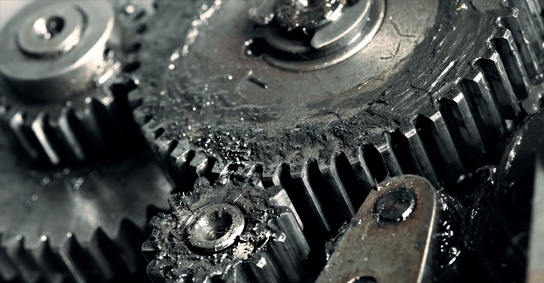 At the industrial level, lubrication is one of the most important matters for ensuring the reliability and availability of the different pieces of equipment that are present, such as mechanical transmissions, motors, pumps, compressors etc. All of these systems require lubrication and are susceptible to tribological failure since they are wear items of machinery. 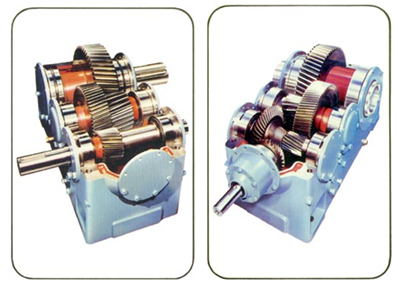 In order to understand the basic points of the article, it is important to mention the fundamental points of lubrication and the Reynolds theory of dynamic lubrication which assumes that the solid surfaces are perfectly rigid and the viscosity of the oil remains constant, although the pressure may vary. Because of the effect of its viscosity and by reason of the speed, the oil generates a pressure that separates the sliding surfaces, forming the so called “hydrodynamic wedge” of a thickness between 1 and 2 microns to achieve complete separation between the two parts. This behaviour is defined in the Stribeck curve.

The useful life of the mechanical items is largely determined by the quality and efficiency of the lubrication system because without good behaviour with regard to friction wear and lubrication, the machine is doomed, sooner or later, to fail.

Types of failure caused by wear

Among those known as surface deterioration, there are descriptions below of various kinds of wear associated with the tribological conditions, responsible for around 60% of the failures that occur in critical machines.

The processes of wear caused by fatigue resulting from contact arise from the succession of repeated loads that can cause superficial failures and detachment of fragments of metal. These produce microcracks in the surface that spread and end up by detaching microscopic pieces of metal. The most common types of surface fatigue are micropitting and pitting or macropitting (visible by the human eye).

Micropitting consists of the detachment of particles in the area of contact. Their size is usually between 10 and 20mm. This normally occurs in surfaces covered with hard metal by different surface treatments and cannot be observed by the naked eye.

Pitting or macropitting occurs when the crack produced by fatigue starts on the surface or below it since as the surface grows a small hollow is formed with sharp edges. Based on the type of damage, macropitting can be classified as non-progressive, progressive, spall or flake.

The non-progressive type consists of hollows of a size less than 1mm in diameter in localised areas. Progressive macropitting consists of hollows larger than 1mm in diameter that cover an important part of the contact surface of the tooth. When different hollows join together forming craters, this is called spalling. Flake macropitting consists in small surfaces that become detached and form shallow triangular hollows in a large area of the tooth.

Examples of micropitting and pitting

The surface wear of the gear tooth implies a displacement or elimination of material due to mechanical, chemical or electrical actions. In the case of adhesive wear, there is a transfer of material from one tooth to another one due to welding and tearing. Typically, the adhesion occurs on the surfaces in contact, where the imperfections of the surface are worn away. Depending on the type of wear, some subtypes are considered such as scuffing, frosting and seizing.

Example of a gear with wear caused by adhesion

The main causes for the appearance of scuffing are the combination of a high velocity of friction with an intense pressure between surfaces which generate heat. Blok’s theory of critical temperature is one of the best criteria for predicting scuffing. Scuffing will occur in the gear teeth under certain lubricant conditions when the maximum contact temperature reaches a critical magnitude.

The amount of wear that can be considered tolerable depends on the expected life of the gear mechanism and control requirements of noise and vibrations. The wear is considered excessive when dynamic loads occur or when the contact surface is so badly affected that it allows other kinds of failure. 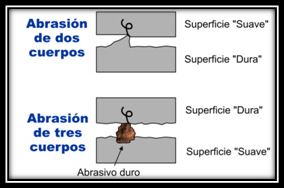 Example of generation of wear by abrasion

Abrasive wear is also produced as chained wear. If adhesive wear is caused by lack of lubrication, it means that the particles that are generated remain between the surfaces as they are not dragged out of them. This in turn generates abrasive wear with three bodies, which leads to the generation of more particles.

The abrasive particles can come from the machine itself, i.e. from other processes of wear or from the exterior. The maintenance work and procedures that require the opening of any lid that covers the gears must be done with care so that the lubrication system of the oil does not become contaminated.

The phenomenon of corrosive wear occurs when the ambient conditions cause the detachment of particles from the surfaces in contact. Commonly, the acidity of the lubricating fluid is one of the principal causes of this kind of wear, although it can also be created by certain additives present in the lubricant (EP), which may be chemically reactive and can cause this phenomenon. 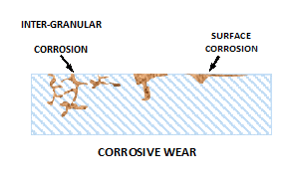 Example of generation of corrosive wear

How does poor lubrication affect the loss of utility of a machine?

Deficient lubrication leads to greater friction, an increase in the operating temperature and a deficient cleaning of the work area. All of this increases the probability of a reduction in the utility of the machine, with the operational and financial cost that it brings with it.

It is important to bear certain aspects of the lubrication in mind in order to avoid or reduce the types of failure :

- Appropriate viscosity when cold for start up.

- Adhesion to components to protect against corrosion.

- Demulsibility to separate the water and oil in the most efficient way so as to facilitate drainage.